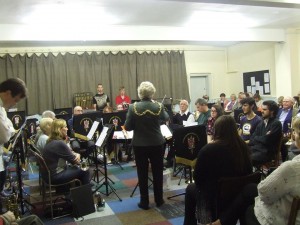 Friday September 25th, 2015 – Our new band room is officially opened by the Lord Mayor of Stoke-on-Trent.

Trentham Brass Band hosted an Open Evening for prospective new members, and following refreshments, invited guests to an open rehearsal of the Main Band. We were thrilled that so many came along to try a brass instrument for the first time, along with a few who had played in the past but had spent a few years away from the brass band scene. The event marked the end of 6 months of hard work by members of the band alongside members of Longton Central Hall to undertake a remarkable transformation of the room. Further work is needed on the reception area, but we now have an area to rehearse and store all our equipment. Thank you to everyone who has helped.

The Lord Mayor and other councillors were treated to a short ‘concert’ by the band before the official ribbon cutting to declare the band room open. It was great to see so many people sharing the evening with us.