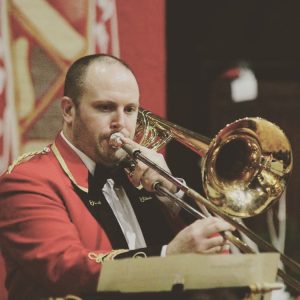 Shaun studied at the University of Salford where he did a BA Hons Music in Band Musicianship.

Whilst studying he received the Roy Newsome Conducting award.

Shaun started learning to play trombone at the age of 11 when he went to High school.

As well as being an accomplished brass player, Shaun is an excellent piano player. Shaun works for Stoke-on-Trent City Music Service as a peripatetic music teacher and conductor of City Youth Brass Band and City Youth Wind Orchestra. He also works for Entrust Music Service.

Outside of brass banding Shaun enjoys socialising with friends, fishing, watching documentaries and comedy TV as well as spending time with his young family.