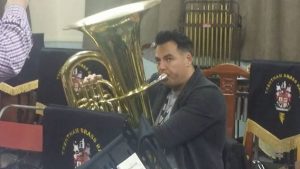 Towards the end of 2016 Trentham Brass Band made an early morning appearance on BBC Radio Stoke. On 28th November a group of players descended on Central Hall at 7-50am. John Acres from BBC Radio Stoke joined them soon after 8. He had been given the challenge of learning to play the Tuba! He had just over half an hour to get to grips with the instrument before going out live on the radio playing the bass part to ‘Silent Night’. The challenge was completed in style. John admitted that he had thoroughly enjoyed the experience but his lips now felt funny! Well done John!